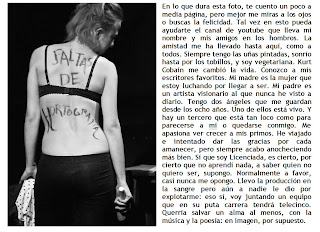 
Some words on the author’s life and research.


Mª José de Córdoba Serrano, Doctor of Fine Arts, has been researching on the synaesthesia field since the

80’s. In addition, she also researches in other topics such as engraving and new materials and illustration systems on synthetic polymers (piece of work published by the Institute of Science and Polymer Technology,

CSIC, in the year 2005). Forerunner of the study and promotion of synaesthesia in Spain, she has managed to organize three International Congresses on Synaesthesia, Science and Arts, unique in Europe due to their multidisciplinary character and bringing together the highest level of researchers among more than universities from 40 different countries. Likewise, she has been able to put in contact several national and international research groups which, sharing their ideas and progress, have created new projects and even implemented university Masters (such as the one offered by the University of Seville on musical performance where synaesthesia is studied and used for artistic didactics basis); Summer courses, international contests on Visual Music, etc. and the establishment of an international and multidisciplinary research group whose members are renown and prestigious neuroscientists such as Edward M Hubbard, California; anthropologists and linguists, like Sean A Day, North Charleston, USA; psychiatrists such as Markus Zedler, Hanover, Germany and visual

communication and design experts such as Dina Riccò, Politecnico University, Milan, Italy, among others; all of them are members of the International Foundation Artecittà(http://www.artecitta.es). Maria Jose de Cordoba is co-founder and chairwoman of the Research Department as well as in charge of cultural projects, promotion and development, carrying out all these tasks altruistically. A fruitful outcome of her responsibilities has been signing collaboration agreements with Granada University, Seville University, and Music Conservatories. Nevertheless, she is committed to keep on hard working to obtain further supports to develop all the projects in mind. She has already become a reference in PhD works, some of them distant from the Arts topic, for example: “Cómo potenciar la generación de nuevas ideas en la fase creativa del proceso de innovación tecnológica en aplicaciones de la ingenieria industrial” (“How to promote the generation of new ideas in the creative stage of technological innovation projects for Industrial Engineering applications”), by Saiz Segarra, Miguel Angel from Catalonia Polytechnic University, 2005. In one of her last articles we can read the following explanation:

“In the last 25 years, the interest in synaesthesia, related to perceptual research, and scientific study of sensorial and cognitive processes, related to creativity and arts… in other words, in relationship with mental

processes and our multiple intellectual abilities (multiple intelligences) has increased and it has become more appealing. Because of the discoveries of our brain structures, provided by new neuro-imaging techniques, we know our brain is further more plastic than it was believed. And there is a set of multiple intermingled nets participating in many of those sensorial processes, where the information from more than 27 sensorial powers are mixed and provide us this special and unique WORLD of perceptions.” (Experimentación artística e inducción a la sinestesia. (Artistic Experimentation and Induction to Synaesthesia) Maria José de Córdoba. 2008. From her first approach to synaesthesia to the last activity she has organized, the 3rd International Congress on Synaesthesia, Science and Arts (April 2009, Parque de las Ciencias, Granada) together with its programme for parallel activities, 20 years have gone by. Her first project was on painting and sound in 1988, and it was funded by the regional Government of Castilla-la Mancha and Albacete Provincial Council. Fine examples of her evolutions are: in 1993 her piece of art “Painting and sound. Hermetic Confines”, sponsored by the social and cultural department of the savings bank Caja General de Ahorros de Granada; 1996, “Impressions of the sound” (Synaesthesia – natural and city sounds), or Zafra Nazari House (Centre for Historic Studies on Granada and its Kingdom). Therefore, a lot of water has passed under the bridges since she started… even if some may think they have discovered something new… synaesthesia is coming in fashion.

INTERRELATIONSHIPS IN SENSORIAL PROCESSES (anthropological, sociological, artistic and educational aspects) by means of the use of new technologies. Application for auditory and visual impairment, presented in the 6th Congress of Applied Anthropology. Ángel Ganivet, University of Granada (UGR). 2004. “Synesthesia Sound/Image/Colour – Proposal for the study of a mathematical model of the synaesthetic processes”. The Fifth Annual National Conference of the American Synesthesia Association, Faculty of Medicine, Houston, Texas.

CREATIVITY IN SYNAESTHESIA. Are synaesthetes more creative than non-synaesthetes?” Department of Experimental Psychology, University of Granada, Spain. 3rd International Congress on Synaesthesia, Science and Arts. Parque de las Ciencias. Granada. 26-29 April 2009 Likewise, the publication of the minutes corresponding to each of the Congress designed and organized by Maria Jose de Cordoba, as well as the International Contest of Visual Music, in collaboration with Professor Dina Riccò, have become the reference for many researches on the synaesthesia field, which is not so emerging any longer. It should also be mentioned the first documentary filmed in Spain about this field, which has been broadcasted, due to its cientific character, by regional and national televisions.

In addition, she is a member of the research group “Cognitive Training” SEJO497, in the Experimental sychology Department of the University of Granada. She also collaborates with the research group Setshif (Experimental Psychology Department of the University of Granada), in projects such as “Cognitive Model of Mental Reconfiguration: emotional and neurological development” started by Emilio Gómez Milán, in 2006.

For further information on projects and publications of the Artecittà Foundation research group, visit: