Preceding the upcoming Accra Symposium, a pre conference was held at the M Plaza Hotel, drawing a large crowd of anticipated guests, who spent the day discussing the women’s movement, youth and media in a gender context. 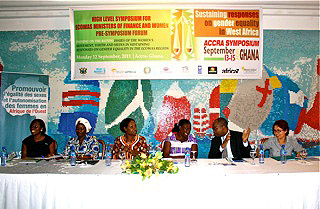 In relation to the Accra Symposium on sustaining responses to gender equality in West Africa, scheduled for the 13th to the 15th of September, a pre-symposium took place today Monday the 12th of September in Accra. The topic of the forum was: Passing on the Baton: Issues of the Women’s movement, Youth and Media in sustaining responses on gender equality in the ECOWAS region. The forum was organized by MOREMI INITIATIVE for women’s leadership in Africa with the support of UN Women. Representatives from a wide variety of organizations, media networks, youth and women’s movement from across West Africa and beyond, gathered at the M Plaza Hotel, to take part in today’s events. Mr Mawuli Dake, project coordinator for Moremi Initiative and lead human rights consultant, opened the forum with welcome remarks and introduction of the officials.


Opening remarks were made by UN Women’s West Africa Regional Director Dr. Josephine Odéra. Other noted speakers at the opening session were Ms. Adowa Bame from the Moremi Initiative and Deputy Minister for Women and Children’s Affairs in Ghana Hon. Boya Garibah.


Ms. Maria Elena Ruiz Abril from UN Women’s office in the Canary Islands and from the African Spanish Women’s Network made the days first presentation as she gave a view on sustaining responses on gender Equality from a women’s movement point of view. Ms. Ruiz Abril described obstacles and challenges for gender equality as well as good practices and lessons learned from her experiences of working with the African Spanish Women’s Network. She further described policy recommendations for governments on how to accelerate the progress of gender equality.


Ms. Christabel Dadzie held the second presentation that described the issues of gender equality from a youth perspective. Ms. Dadzie stressed the importance of women in leadership positions and pointed out the vitality of education in order to advance opportunities for young women to change views and traditions that discriminate against women.


Following the expert presentations, a strategy session was held where participants were divided into three groups (women’s movement, media and youth) to discuss issues and agree on recommendations which were later validated as part of the session. The recommendations will be submitted to the high level symposium. There were several highlights during the strategy sessions with experts from a wide range of organization such the Africa Spanish Women’s Network, the elected youth leaders form various universities in Ghana, members of the Moremi Initiative and media specialists from the region (such as West Africa Democracy Radio and Africa7 ) and from Ghana (Choice FM, TV3) who had all come to discuss the topic at hand.


For more information on the Moremi Initiative – Women’s Leadership in Africa, please visit their website: http://www.moremiinitiative.org/ 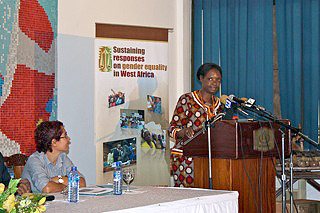